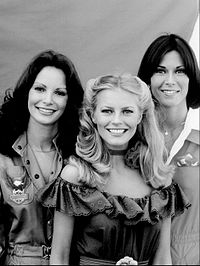 night, my friend and I had a sleepover. After a while we realized that we should probably get dinner, so we drove with my mom over to First Class Pizza. When we got there, not even 5 seconds after I had opened the door to go in after my mom, we hear a, “Hey, you!” A middle-aged looking man was standing there, waving at us. He told me and my friend that we looked like Charlie’s Angels. At the time, I had thought he was saying, “Chinese Angels.” This further pushed my belief that the man was either intoxicated or not all there. He proceeded to look again at my mom and realize that she was a guardian figure (read: “old”) – not one of three young girls. The man then began apologizing profusely to her, which made me and my friend feel kind of bad about it. We stayed calm because he seemed harmless, and eventually walked away after reassuring my mom – what, about… 300 times? – that it had been a joke and he just meant that we were pretty. I’m pretty sure he had good intentions at first?

After that we got our pizza, and during the car ride home, we got a lecture – woo hoo! – on how we should always be on the watch for people who want to hurt us, and that we never know who’s harmless and who isn’t. The whole thing was just a little awkward for me and my friend, especially since we didn’t get the reference to the show.

Well, being us, there was only one thing to do when we got home. (Weeeeelll… two.) 1. Look up Charlie’s Angels. As soon as the results popped up, we looked at each other, and the expression read perfectly: those look nothing like us. Honestly, the only Angel that we even looked a little bit like was the blonde one. I really hate it when people stereotype blondes. 2. Eat pizza.  Who could forget about the pizza? But seriously, blondes. At the risk of sounding stuck up, I’ll admit I’m a smart person. I get all A’s, and I like to think. However, when people look at my scalp, then back at me, most would say that I hardly scrape together C’s and D’s. (To be clear, nothing lower than a B has ever made it onto my report card!)

People today think of blondes as ditzy and not worth anything. I find this a little disturbing, seeing how we are a country that is trying to get rid of the ideas of discrimination and racism. (However that’s going to be much harder come the start of January if you’re talking leadership.) Sure, blonde jokes are funny, and when I tell them, people know I’m kidding. But when I do slip up, make mistakes (Wow! I’m not perfect? And I’m on the internet? Golly, I’ve been looking at life all wrong!), you don’t know how many times people have said things along the lines of, “blonde moment?” I don’t think that, just because I’m blonde, I should have a special term for messing something up. What about brunette moments? Huh? Or redhead moments? Oh, but that’s just discriminating hair colors. Well, no it isn’t. It’s discriminating against the person with those hair colors. When you say that blondes are ditzy, you aren’t making fun of their hair. You’re making fun of their person. Their being. And let me tell you, that doesn’t feel good. At all.

So how does this connect back to “Charlie’s Angels?” Let me tell you. I know that the man probably wasn’t all right in the head, but just seeing a blonde and having it connect to words like ditzy, shallow, idiot, just isn’t right. When we realized that he said we looked like them because we had a blonde, a brunette, and a bright-colored hair person, I don’t know if it had any effect on my friend, but I know it had an effect on me. I didn’t forget the next morning, and I probably won’t forget – ever. There are certain things that make an impression on people. This did. Not because of the incident itself, but what it meant to me. So please, if you’re reading this and you’ve stereotyped a blonde(s) before, just think about how it would make you feel if you were said to be <name quality that people look down upon> just because of your physical appearance. It’s not a great feeling. But hey, I’m just a dumb blonde, right?